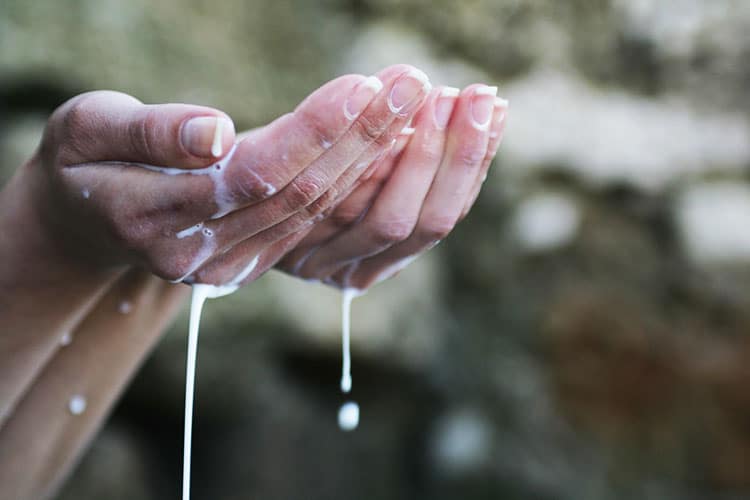 Although there’s a good chance that you already use milk in your morning coffee or tea, you may not have tried adding milk to your baths before.

If you haven’t, you might not know about the rich history of milk baths: The Egyptian pharaoh Cleopatra reportedly bathed in milk, as did the English queen Catherine Parr and Italian noblewoman Pauline Bonaparte, sister of Napoleon. Most recently, singer Mariah Carey has sworn by milk baths’ beautifying properties.

Why has the popularity of dairy-infused baths remained so strong for so many centuries? Here, we’ll find out.

The health benefits of milk baths include:

Read on to learn more about what milk baths can do for you. 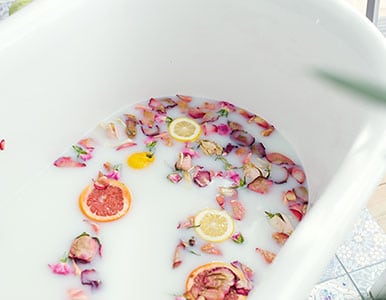 Whole milk has about eight grams of fat in every one-cup serving, making it a relatively high-fat food. Although its high fat content may not make it an ideal addition to a low-fat diet, it does make it exceptionally moisturizing to the skin.

In a 2016 article, “The Benefits of Applying Milk to Your Hair in Skin,” dermatologist Amy Brodsky told Allure magazine that:

“Pure milk is extremely soothing and hydrating for the skin, so milk baths, cold milk soaks or using topical beauty products with milk as the main ingredient is a great way to soothe and moisturize any dry, irritated areas of the body.”

According to a 2003 article published in the American Journal of Clinical Dermatology, “Role of topical emollients and moisturizers in the treatment of dry skin barrier disorders,” fats are one of the ingredients in creams and lotions that actively replenish the skin’s moisture.

So, next time your skin is feeling dry and flaky, a milk bath could help your skin supple, soft and moisturized again.

In addition to fat, milk also contains plenty of calcium — one cup is packed with about 275-305 mg, or about 30 percent of your daily nutritional value.

Calcium plays an important role in the skin’s ability to replace old skin cells with new ones, according to a 2003 study in the Journal of Investigative Dermatology, “Influx of calcium and chloride ions into epidermal keratinocytes regulates exocytosis of epidermal lamellar bodies and skin permeability barrier homeostasis.”

Another study published in the journal Experimental Gerontology in 2015, “Skin aging, gene expression and calcium,” found that the appearance of aging skin is caused in part by lower calcium levels.

What this means is that calcium-rich products like milk may help skin retain its calcium levels and look younger overall.

Milk is one of the best dietary sources of vitamin B12: Each cup contains about one microgram, or approximately 18 percent of your daily nutritional value.

Vitamin B12 is an effective topical treatment for eczema, according to a 2004 study in the Journal of Dermatology, “Topical vitamin B12–a new therapeutic approach in atopic dermatitis-evaluation of efficacy and tolerability in a randomized placebo-controlled multicentre clinical trial.”

That study found that topically applied B12 reduces the signs of eczema, including redness, dryness and abrasions.

It discovered that people who use a moisturizer that’s enriched with vitamin B12 experience significantly reduced itching and redness.

Whether you have a diagnosed skin condition or simply get occasional itching and redness, a milk bath may be able to provide relief.

There are two methods of exfoliation: Physical and chemical. Both methods can effectively remove dull, dead cells from the skin’s surface, but chemical exfoliation is generally much gentler and can produce more even results over time.

Milk contains lactic acid, which is an alpha hydroxy acid (AHA). AHAs are one of the most popular types of chemical exfoliants, and for good reason: A 2014 study published in the journal Clinical, Cosmetic and Investigative Dermatology, “An antiaging skin care system containing alpha hydroxy acids and vitamins improves the biomechanical parameters of facial skin,” found that skin care regimens which include both AHAs and vitamins significantly improves the appearance of wrinkles, smoothes skin texture and increases elasticity.

If you’re after more glowing, smooth-looking skin, a milk bath might be just the thing you’re looking for.

As it turns out, Cleopatra was on to something: From moisturization and exfoliation to redness relief and improved cell turnover, milk baths can do a lot for your skin health.

Next time you take a bath, try pouring in a couple cups of milk along with your favorite oils, salts or bath bombs. You may not be an Egyptian pharaoh, but you can still enjoy the health benefits that milk baths have to offer.